Here and then it’s gone 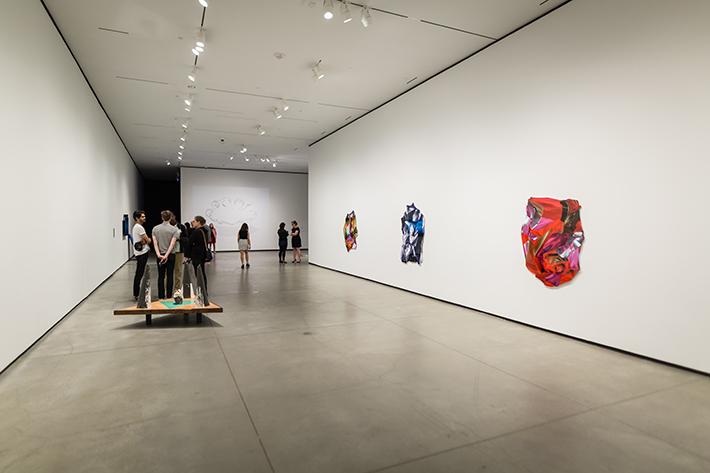 for the time being: 2017 Alberta Biennial of Contemporary Art is a momentary masterpiece

for the time being: 2017 Alberta Biennial of Contemporary Art is open all summer! This year marks the Alberta Biennial’s 10th anniversary. On the afternoon prior to the opening, I had the opportunity to speak to some of the artists and curators involved in creating the exhibition to find out what makes this biennial special.

The curation process began approximately two years ago, when co-curators Kristy Trinier and Peta Rake undertook a series of cross-province studio visits to select the artists. As they passed through different regions, they noticed many of the artists were taking an active role in building their communities’ artistic climate by creating and self-initiating different cultural events and projects.

Previously, Trinier curated the 2015 Alberta Biennial: Future Station. “One of the things I noticed in the process of launching that exhibition,” she comments, “ was that some of the artists were meeting each other for the first time at the opening reception.” With a group of artists that are already such driving forces in their individual communities, uniting their voices in the conception of the exhibition was too good an opportunity to miss.

“We decided to bring the artists together a year in advance and talk about what it means to be an artist participating in the Alberta Biennial,” says Trinier. And so the “Biennial Sessions” were born. From these group meetings, central themes emerged: language, interstitiality, visionality, politics and personal revelations. “We hadn’t formed the themes of the exhibition,” confesses Trinier, “so it was a little bit of a risk to open that up and be receptive and try to incorporate all of those perspectives and thoughts and desires into our curatorial framework.” However, a walk through the current Biennial would indicate that the risk has paid off.

Roy Caussy, one of featured artists, says meeting the other artists pushed him to do better work. “It just made me see the level of work coming from all of the other artists involved,” says Caussy. “And that made me really want to up my own game as well.” Caussy’s project, Kalispell (Mataji), mimics the natural formations he observed during his time studying in Southern Alberta, as well as the way time passes and all things come to an end.

Tia Halliday has 3 works included in the Biennial. Her works use dancers to explore and embody the movement that happens under the skin of an abstract painting.

During our conversation, she commented that the “Biennial Sessions” fleshed out convergent themes throughout the artists works, even among works where interconnectivity isn’t immediately apparent. “I think that’s the challenge with biennials, that you have a lot of different things going on,” says Halliday. “But I think this exhibition here is a really nice example of some strong cohesiveness throughout the work.”

for the time being is a snapshot of a moment in time, and grants an audience a lens to view the times we live in. “for the time being shows that this time that we are in right now is a shared time, with us as curators, with the artists and with the audience, and it will disappear and be no more,” says Trinier. Trinier feels it’s this essence of contemporary art—a medium that exists in our present— which makes this exhibition unmissable. “It’s a really important time for the public to come see what artists are thinking and feeling and what they feel is most imperative to share with the public right now,” says Trinier.

Come see for the time being: 2017 Alberta Biennial of Contemporary Art before the summer ends! And don’t miss the other half of the exhibition, which includes different artists and works than in Edmonton, at Banff Centre for Art and Creativity’s Walter Phillips Gallery.

The 10th Alberta Biennial of Contemporary Art is generously sponsored by ATB Financial.