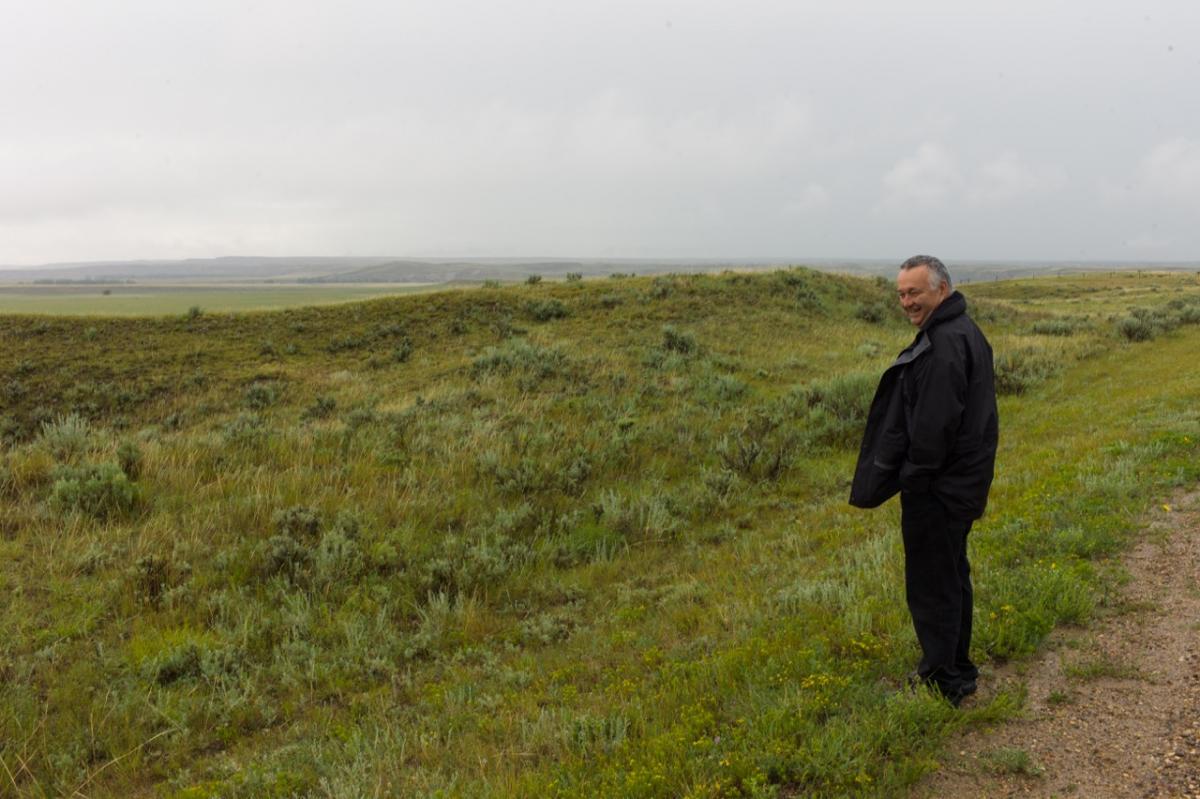 Visitors can catch Clay Ellis in the exhibition, borderLINE: 2020 Biennial of Contemporary Art at your AGA from September 26, 2020 to January 3, 2021.

Featuring 38 artists and collectives across two provinces and five treaty territories, borderLINE calls attention to how borders are defined, who can enforce them, and what is confined by their limits.

What are the borders you are confronting with your work?  What are you hoping that visitors to the biennial will take away from your work? What do you think visitors should know about you and your work before they come visit the exhibition?

The signage that I imagine the “The Block” to represent is not designed as an attempt to guess at the long term effects that the military’s activity will have on the grasslands . . . that is simply too complex of an issue.

I do believe the true historical significance of the region is yet to be fully realized. One piece couldn’t begin to cover the history of this parcel of land, so I see “The Block” as a place-marker to events that cannot be changed . . . but can be reviewed.

The border that marks the perimeter of the Suffield Block represents a history of actions carried out by a succession of governments, blind to the nature of the landscape, and brutally dismissive of the cultures and rights of the original inhabitants.

There is a particular oxbow on the South Saskatchewan I visit often. It borders the Suffield Block (also referred to as the British Block). Evidence from archeological sites in the area suggests that it has been occupied periodically for at least the last 3000 years.  Whenever I’m there, I’m reminded of Ruskin’s View (overlooking the Lune Valley) and his view -‘one of the loveliest views in England, therefore in the world’. This quote is from 1875, a few years after the Dominion Lands Act, the legal mechanism that made possible the distribution of western lands (in violation of treaty agreements) and a few years before the plains were cleared for the CPR.

After the decision was made to run the CPR through the prairies, indigenous communities were forced from their traditional territories, clearing the way for railway construction and settlement.

If Palliser’s report, from the mid 1800‘s expedition, had formed the “Crowns” original assessment of the area, as being unfit for cultivation or settlement, it was soon dismissed. From the late 1800s on, the settling of this region was heavily promoted by government and investors. The CPR was granted a swath of land on either side of the railway right-of-way — roughly 10 million hectares. Given its proximity to transport, it became the most desirable land on the Prairies. The CPR became an integrated corporation, consisting of passenger/freight transportation, communications, and land sales. It developed a recruitment strategy that aimed to lure Canadians and immigrants into the West.

The immigration campaigns were designed to attract settlers, mainly for the wellbeing of the CPR. Selling land according to a grid of sections meant that access to fresh water was left to chance, not ideal for the rich farm life the company was promoting, but sustainability was not a concern for the CPR or the Lands Act.

Settlers, unfamiliar with dealing with the drought cycles of the prairies, struggled to survive. During a long severe drought in the 1930’s an estimated 247,000 people left the  prairies, abandoning nearly 14,000 farms, encompassing 1.3 million acres.

While many farmers struggled, there were ranchers, from an earlier wave of settlers, who had adapted to shortgrass range management and were making a go of it, even during the 1930’s.

In 1941 the Canadian federal government expropriated the Suffield Block, a 2,700 square kilometer parcel of prairie, located in southern Alberta. The site, ostensibly chosen because of its limited agricultural value, was to accommodate a training facility for testing the effects of chemical warfare.

Time passed and the activities were expanded to include, chemical and biological defense, explosives threat assessment and blast effects (in 1964 a detonation of 500 tons of TNT, the largest ever man-made, non-accidental explosion in Canada), as well as hosting the largest military training live-fire area in Canada.

Ironically the need for a buffer zone between the live fire training area and the ranches  bordering the base created the Suffield National Wildlife Area. The area includes a tract of land that from 1922 to 1938 had been the Wawaskesy National Park, originally created to insure the survival of the pronghorn antelope. Wawaskesy is the Cree word for pronghorn antelope

Presently, the parcel of land abutting a virtual war zone is the largest block of predominantly uncultivated grassland remaining in Prairie Canada, and crucial to the survival and recovery of prairie grassland species that have been identified as species at risk. While the preservation of this wildlife area is, for the most part incidental, the military commanders have successfully stopped further oil and gas exploration within the  Suffield National Wildlife Area , which they argued were having a bigger impact on the environment than their presence.

For millennia this shortgrass prairie was grazed by large herds of bison, antelope, deer, and elk. These species were migratory, responding to environmental variables. The resulting rotational grazing allowed the vegetation to recover in the absence of herbivores. Likewise, the people who followed and were sustained by these herds had little impact on the environment.

As the following excerpt from a My Wild Alberta fact sheet reveals, these grassland can still sustain herds of wildlife.

An elk herd was re-introduced at CFB Suffield in 1997. From a population of about 200 elk in 1997, the population grew to more than 7,000 by 2014. Because there are few predators in the area, without hunting, this population was projected to increase by more than 20 per cent annually. The overall aim is to reduce conflict with neighbouring agricultural producers and maintain a sustainable number of elk, which are an important large grazing species native to the prairie habitats of CFB Suffield.

If visitors want to know more about your work or the issues you are raising where should they go to learn more?

I see “The Block” as one component in the fourth and final installment in a suite of public exhibitions that began in 2005.

”Eight Miles of Barbed Wire” (2005) and “Weaners, Culls, and Divvies” (2014) followed a thread of perceptions and recollections relating to the transformation of the Western landscape.

“The Third Stake” (2016) positioned my own ambitions in the process of change and development.

Images and catalogue excerpt can be found on my website clayellisart.com/