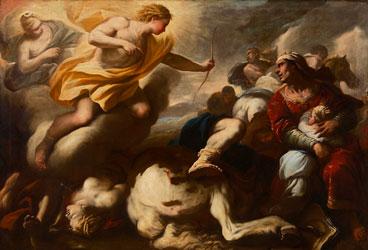 Italian Baroque Art is most often associated with dynamic movement, overwhelmingly-rich colors and compositions, and the creation of new pictorial subjects. The style known as Baroque (c. 1590-1715) was centered in Rome, Naples, and Bologna and subsequently spread to other international cities, including Madrid, Paris, London, and Amsterdam.

Illuminations is the first comprehensive exhibition examining the breadth of Italian Baroque painting in Canadian public collections. The exhibition explores how light and shadow were central to the creation of dynamic and theatrical pictures. The selected paintings are examined by investigating the artists’ chiaroscuro – the pictorial effects created by light and shade. In contrasting Mattia Preti’s and Jusepe Ribera’s deeply shaded pictures with Luca Giordano’s and Nicolas Poussin’s luminous works, the exhibition reveals how light was strategically used to signify demeanour, emotion or religious symbolism.

Through a comparison of religious, mythological, and popular imagery, Illuminations simultaneously explores how Baroque audiences were confronted with paintings that broke with tradition by manipulating the conventional use of light. In addition to painting monumental religious imagery, artists also depicted large and theatrically-lit gambling scenes and street concerts. Such paintings emphasize the conflicting aspects of seventeenth-century life, including those between the secular and religious, public and private, and decorous and profane.

Featuring many of Canada’s foremost Baroque pictures, the exhibition examines a culture – similar to our own – that was captivated by theatrical display.

This project is generously funded by the Canadian Government through the Department of Canadian Heritage Museum's Assistance Program.