Fischli and Weiss / Ibghy and Lemmens

In 1987, Fischli and Weiss created a 100-foot long chain reaction masterwork of cause and effect, precision and technical finesse. In 2012, Ibghy and Lemmens documented a laborious process of assembling, stacking and attempting to balance mundane office equipment. These two films tell two sides of a story–of human ingenuity, industry, and aspiration—and our obsession with success and the inevitability of failure.

In 1987, the Swiss artist duo Peter Fischli and David Weiss created a moving image work, which quickly became an international sensation. Entitled “The Way Things Go,” this 30-minute video tracks a 100-foot long chain reaction created of common household objects that are set in motion by the effects of fire, water, air and chemical reaction. The Ways Things Go is a masterwork of cause and effect, precision and technical finesse.

In 2012, Canadian artists Richard Ibghy and Marilou Lemmens created the work “Real failure needs no excuse,” shot in an unoccupied office building in Glasgow. Using the mundane office detritus left behind by previous tenants, Lemmens engages in a laborious process of assembling, stacking and attempting to balance an assortment of objects, building temporary structures and compositions that become increasingly precarious as they approach their ultimate collapse.

This exhibition brings together these two moving images works, created decades apart, that seem to tell two sides of a story—a story of human ingenuity, industry, and aspiration—as well as our enthralment with success and the inevitability of failure. 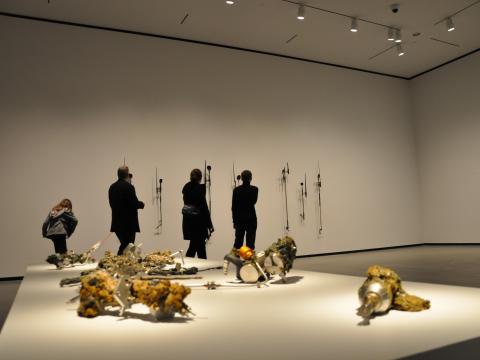