Fix your hearts or die: A New Chapter Acquisition Project 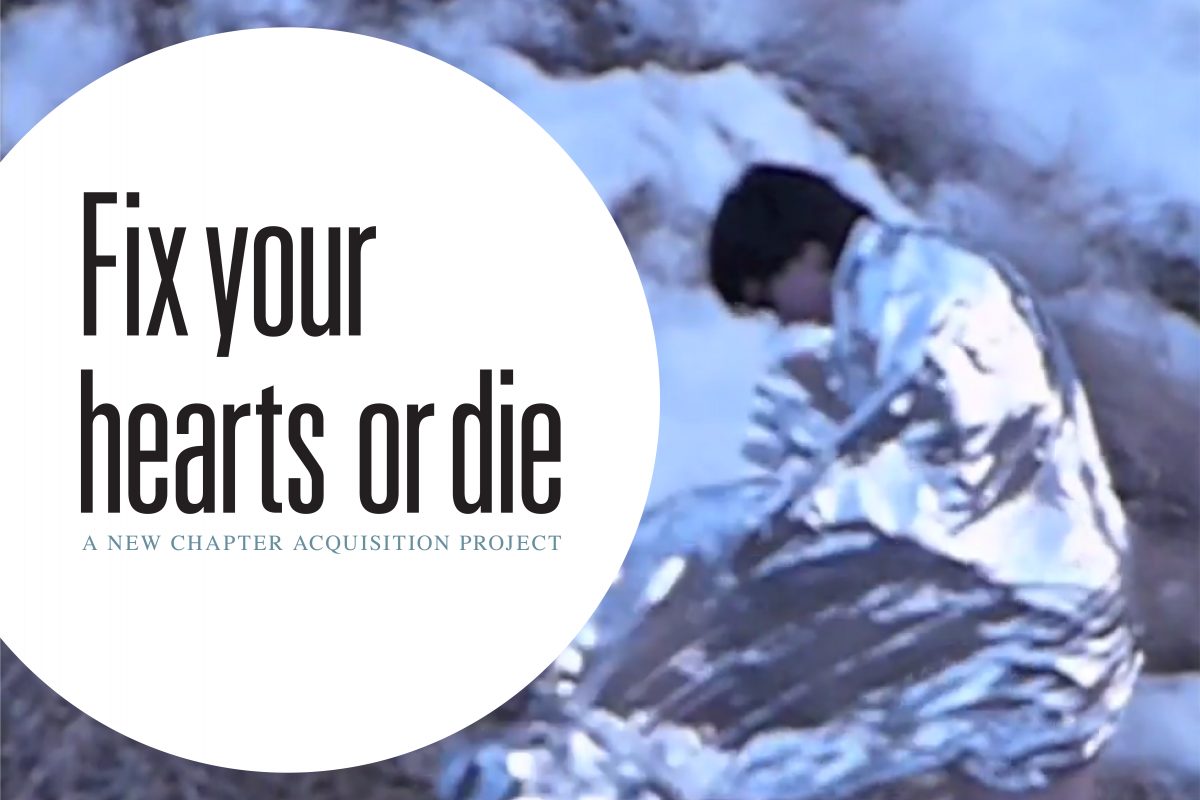 Fix your hearts or die is a call to action wherein the stasis of maintaining the status quo is equivalent to death, either metaphorical or real. It is a call to viewers to engage with difficult or challenging topics and the complex intersections that are present for Indigenous artists. Cheryl L’Hirondelle uses a prospector tent, projection, and sound to create a space where alternate cognitions and a self-determining existence as a self-described half-breed woman exhibits and transmits unconventional, seer-like illuminations. Daniel Cardinal McCartney lays bare the disruption of his family due to the damaging effects of residential school, and connects this history to his gender identity and ongoing discrimination. In an act of great care, Sheri Nault adorns natural materials with beads, human hair, and bondage rope to connect themselves as a queer Indigenous person to the natural world. Adrian Stimson dissects and re-imagines a violent engraving from the 1500s by Theodore De Bry as a series of paintings wherein smiling nude Indigenous men hold puppies while observed by Spanish conquistadors, rather than being torn apart by dogs, as in the original work.

The title Fix your hearts or die stems from the 2017 continuation of the cult television series Twin Peaks. In it, FBI Agent Gordon Cole (played by David Lynch) confronts fellow agents when they make transphobic comments out of earshot about Agent Denise Bryson, a trans woman (played by David Duchovny). The transphobic agents assume Agent Cole’s complicity in their comments, and are shocked when he instead admonishes them loudly to “fix your hearts or die.” Although the casting of Duchovny as a trans woman is problematic, the message is clear: silence in the face of discrimination is stasis, the death of existence on a spectrum. The call is even more urgent for marginalized persons where death is not simply a metaphor. Many Indigenous men, women, queer, and trans people have paid with their lives for their existence. The artists in Fix your hearts or die grapple with these histories and make space to be who and how they are and to project this being into the world, for themselves, for their communities, and for future generations.

This is one of the 200 exceptional projects funded through the Canada Council for the Arts' New Chapter program. With this $35M investment, the Council supports the creation, and sharing of the arts in communities across Canada.

Organized by the Art Gallery of Alberta. Curated by Jessie Ray Short.

Hear the Artists and Curator Speak

Jessie Ray Short is an artist, filmmaker and independent curator whose cross disciplinary practice involves memory, visual culture and Métis history. In the past 10 years she has exhibited work nationally and internationally at venues including The Banff Centre for the Arts, M:ST Performative Arts Festival, Calgary AB, and at the Wairoa Māori Film Festival in Wairoa, Aotearoa (NZ). Jessie Ray has been the recipient of several grants from the Canada Council for the Arts, Ontario Arts Council and the Alberta Foundation for the Arts. As a curator she has had the opportunity to work on various projects most notably Jade Carpenter: Mourn at City of Calgary Open Spaces Gallery and Mixed Berries: Amanda Strong and Bracken Hanuse Corlett at Gallery 2, Grand Forks, BC. She has worked for the Ociciwan Contemporary Art Collective, based in Edmonton, AB, and currently works as a program coordinator for TRUCK Contemporary Art in Calgary, AB. Jessie Ray holds an MA degree from Brock University with a focus on contemporary Métis visual culture.