The term suburbia means “under the city” meaning not just ‘away’ or ‘apart’ from an urban core but also of being subjected to the city itself: affected by ‘the model life’ of 20th century urbanity. Grid-style urban plans in post-war business districts and the search for more space pushed mid-century residents to the suburbs and to mobile home communities on the periphery of the municipality. Photography from the late 1970s to mid-1980s reflects the image of this life that is separate yet always connected to the city, referencing the aesthetics of movie snapshots, early 1980s documentary photography as well as corporate advertising.

With images taken across North America, Suburbia: a Model Life represents the suburbs and modern urban design strategies, presented in the idealized aesthetics indicative of this era. The photographs depict the corporate core of the booming early 1980s grid-city and the calm 1970s mobile homes and new residential developments of bedroom communities, as well as indicators of modern middle-class modern social and family life – images from office interiors and trade displays to backyard patios and parking lots.

Suburbia: a Model Life is presented with a series of works by American-born photographer Hubert Hohn. His photographic series, The Project: Suburban Landscapes, are black and white archetypal studies of early suburban neighbourhoods. In addition, a contemporary representation of suburban planning documents will be presented by Toronto-based artist An Te Liu. As a case study in local urban planning, this exhibition includes the original linen, mylar and Completed Registered Plans from one of Edmonton’s largest suburbs: Mill Woods.

This exhibition features photographs that are part of the Art Gallery of Alberta’s collection. Linen, mylar, and Completed Registered Plans are courtesy of Alberta Land Titles and the Province of Alberta Archives. Sincere thanks to Merlyn Cajindos and Alberta Land Titles, the City of Edmonton and Stantec Consulting Ltd. for research assistance. 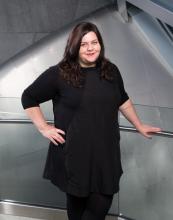