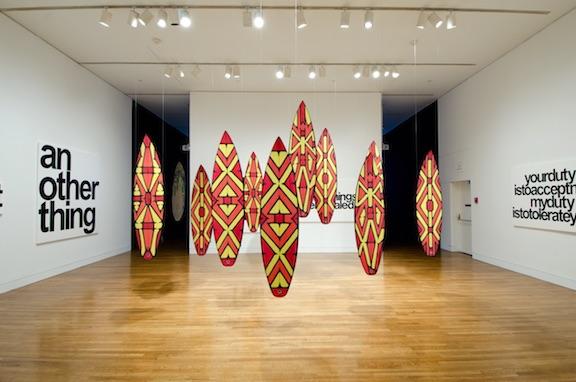 **Please note: There is no photography allowed in this space**

This exhibition presents an installation composed of a three-channel video, text, portraiture, and suspended surfboards by Australian contemporary artist Vernon Ah Kee (Kuku Yalandji, Waanji, Yidinji, and Gugu Yimithirr). Referencing the 2005 Cronulla race riots that took place near Sydney, Australia, cantchant provides a compelling statement on the racially motivated conflicts between white Australians and more recent, non-Western immigrants to the country. Vernon Ah Kee transforms the irony of the riot chant “we grew here, you flew here” into the proclamation “we grew here”, which is reinforced by the suspended shields displaying Yidinji patterns and the colours of the Australian Aboriginal flag. One must pass through the suspended “shield/boards” to view a video of professional Aboriginal surfer Dale Richards riding one of the boards. In the video, the surfboard becomes a metaphor for the Aboriginal body and the violence enacted upon Aboriginal peoples. At the exit, portraits of the artist and members of his extended family are revealed on the bottoms of the “shields/boards,” signifying continuing Aboriginal presence.

Organized by the Art Gallery of Alberta and the National Gallery of Canada as a part of the NGC@AGA exhibition series.

Vernon Ah Kee was born 1967 in Innisfail, North Queensland, Australia, and lives and works in Brisbane, Australia. Vernon Ah Kee’s conceptual text pieces, videos, photographs and drawings form a critique of Australian popular culture from the perspective of the Aboriginal experience of contemporary life. He particularly explores the dichotomy between Aboriginal and non-Aboriginal societies and cultures. Ah Kee’s works respond to the history of the romantic and exoticised portraiture of ‘primitives’, and effectively reposition the Aboriginal in Australia from an ‘othered thing’, anchored in museum and scientific records to a contemporary people inhabiting real and current spaces and time.