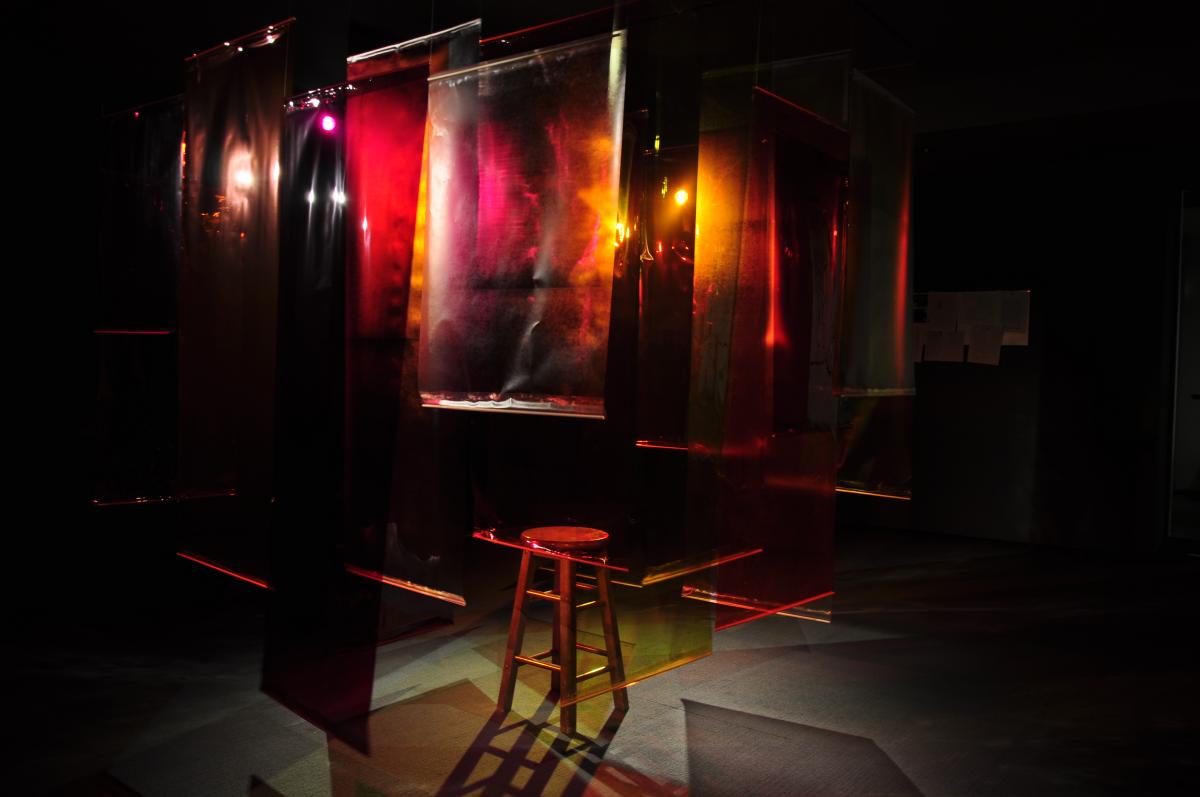 For the first installment of the RBC Work Room, artist Zachary Ayotte and music duo Nulle Part worked together on an on-site creative collaboration for a developmental period of six weeks. The artists worked in the space and revealed their creative practices to the public and allowed gallery visitors to see the progressive development of the exhibition from beginning to end.

Working with sound, installation and photography, Shelter is an exhibition that plays with the boundaries between public and private, light and dark, seen and unseen. Artist Zachary Ayotte shares his experience with “Ten Thoughts on Shelter” that will be shared over the course of three installments.

As an artist, I am always curious about what information we get from surfaces. A photograph often suggests depth but it is a flat surface. Through this process of flattening we limit access to information. We conceal. I often wonder what we gain from flattening and what we exclude.

Ideas of watching and being watched are ever present in our culture today. Discussions about what personal representation looks and feels like, what information is included and excluded in images we ingest, what power there is in inhabiting a space that is under surveillance; these became the bridge between the unique process of the project and the work that would finally inhabit the space. This focal point of looking and being looked at became the starting point for Shelter.

With that in mind, my part of the project began with a single eye. Blinking. Watching. Filtered by a red gel, not unlike the ones that would occupy the neighbouring room.

You are watching us.
We are watching you.
In a space about looking. About experiencing.
A public space.
But also a private space.

In its infancy, the room was most obviously under construction. People would think they were interrupting when they entered the room. We would insist that they come in and sometimes they stayed and engaged, sometimes they moved through quickly—like they were touring a home while the owners were still in it.

After a variety of different experiences with viewers, I came to the decision that the two most important things one can enter a gallery with are openness and self-awareness.

A gallery is unintentionally (or maybe intentionally) confrontational. It presents something and says, “This is my work. What do you think?” Publicly expressing an opinion can be nerve-racking at the best of times for many of us. That feeling can be amplified when you assume there is a right answer and a wrong answer. Or when you consider what that answer might say about you. The result of that pressure can be to tighten up. To be distracted by the pressure of the moment in a way that negates openness. I think this is a common reaction.

Of course you can't recognize any of these feelings without self-awareness. To recognize why we respond to something a certain way, allows us to start to unpack the complexity of the relationship between a work of art and a viewer.

To me, the most rewarding interactions I got to witness were when people were willing to stay with the work and spend time in the room. When one goes to a movie, there is a clear beginning and a clear ending. The amount of time one is supposed to spend with the film is clearly outlined. In a gallery space, time is more ambiguous. As a result, I think we sometimes forget the important role that time plays on an interaction. How we feel when we first enter a room may not be how we feel after we've been there for a few minutes. Glancing at a painting will yield different results than actually sitting with it. I wanted people to spend time with the work which made getting to see those moments where people lingered a real treasure.

My favourite part of making the work in the space was the beginning. For the first three weeks I was building the structure that would eventually occupy the east side of the gallery. As each piece went up, the room changed.

I knew what I wanted the structure to look like. I had mapped it out as best I could and had measured everything to scale. The actual construction of this portion of the piece felt methodical. It was nice to be in the space and simply actualize what I had pictured.

There was a moment, after we had been in the space for two weeks or so, when I realized it could all go wrong. I had done a few tests prior to being in the space but I hadn't fully built the work. In spite of that, I hadn't considered the possibility of failure. My part of the project hinged on the construction of this structure. If it didn't work, the work that would follow would be incomplete. This hurdle, that what you might be trying to make might not work, is one that is common when making anything. What is less common is having to overcome that hurdle while the public is watching.

In physics there is something called the Observer Effect which, in its simplest form, states that the act of observing something changes the nature of what is being observed. I do not believe the observer effect is typically used to discuss social and psychological behaviour but I could not help but think of it while I was in the room. 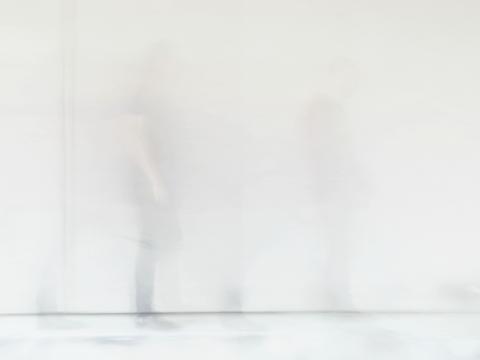 Nulle Part is an Edmonton electronic production duo that makes hazy melancholic music inspired by the concepts of place, longing and loss. 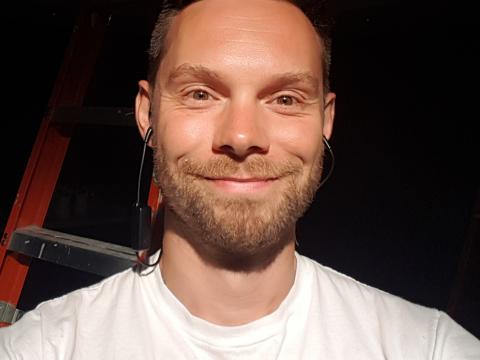 Zachary Ayotte is a visual artist working primarily with photography and installation. With light and form, he uses depictions of bodies and space to explore gender and sexual identity, power, distance and experiences of the unknown.