The Power of Art to Influence Social Change 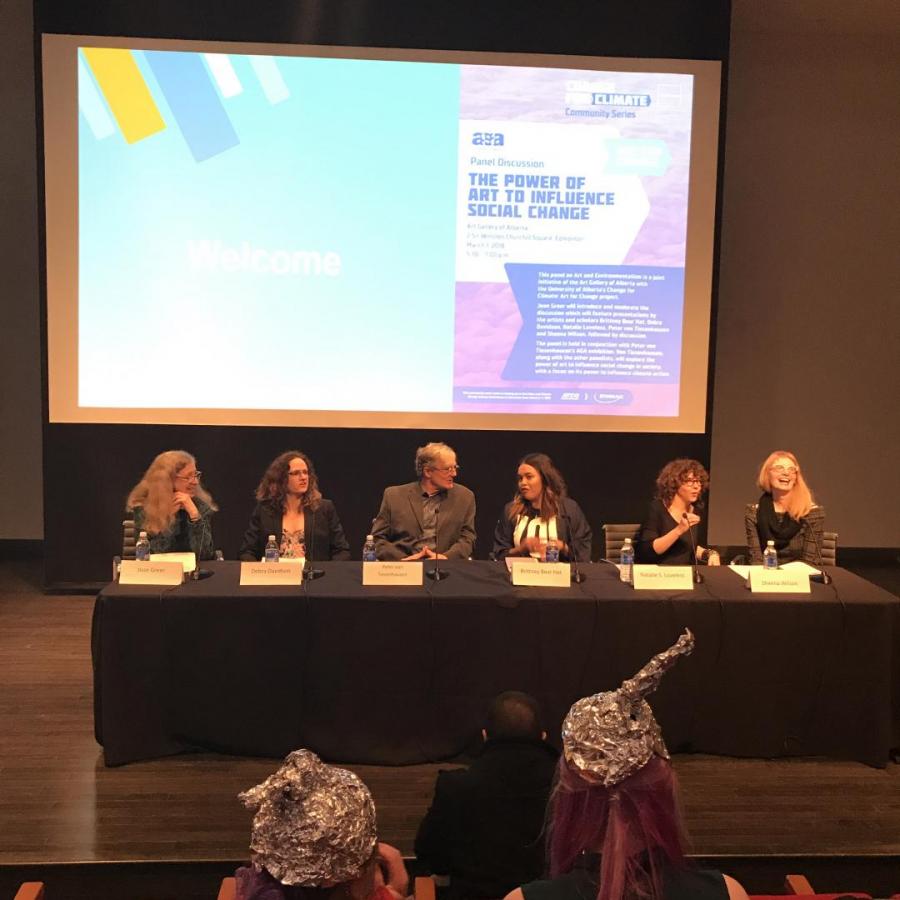 From March 5 to 7, Edmonton had the honour of hosting the first-ever global Cities and Climate Change Science conference. Ahead of this event, the Art Gallery of Alberta partnered with the University of Alberta as part of the City of Edmonton’s Change for Climate Community Series entitled Art for Change to bring together a panel of researchers, activists, and artists to talk about how art can influence social change.

The panel was moderated by Joan Greer, professor of the history of art, design, and visual culture at the University of Alberta and the panellists included Debra Davidson, Brittney Bear Hat, Natalie S. Loveless, Peter von Tiesenhausen, and Sheena Wilson. Three themes emerged from the discussion: emotion, our environment, and empathy.

Debra Davidson, a professor at the University of Alberta and the principal investigator for the Social Impacts of Fracking in Alberta project, began the discussion by comparing scientific graphs and charts depicting climate change data with artistic representations of the effects of climate change. The scientific graphs may show the effects of climate change but, as Davidson pointed out, people don’t experience the world around them in the form of data. They need an emotional connection. Davidson gave the panel a great starting point. She said, “emotion motivates us and artists understand emotion better than any of us.”

With the help of our emotions, art can elevate our relationship with our environment. Peter von Tiesenhausen spoke about his work and how he finds inspiration in the Alberta landscape. “Whatever surrounds you, that’s what you engage with,” he says.

Albertan artist Brittney Bear Hat also draws inspiration from the land. Her recent exhibition at Latitude 53 includes photographs of Pink Mountain, an area in British Columbia, with text drawn from conversations with her father. Bear Hat tells us that “we all have some kind of experience out on the land, and it is important to share that.”

So what’s next? What actions should you take once you are motivated to do something? Natalie Loveless and Sheena Wilson spoke about empathy and how to channel our emotions into actions of care. They emphasize the importance of a holistic approach to care and encourage care in three relationships: ourselves, each other, and other species. Peter von Tiesenhausen closed the panel with these words: “we do what we can, wherever we can.”

This panel was held in connection with your AGA’s exhibition Peter von Tiesenhausen: Songs for Pythagoras. Make sure to visit the AGA and see for yourself how von Tiesenhausen incorporates the Alberta landscape into his art. Exhibition on view until May 6, 2018.