"Is it ever done?" Paul Freeman shares his creative process. 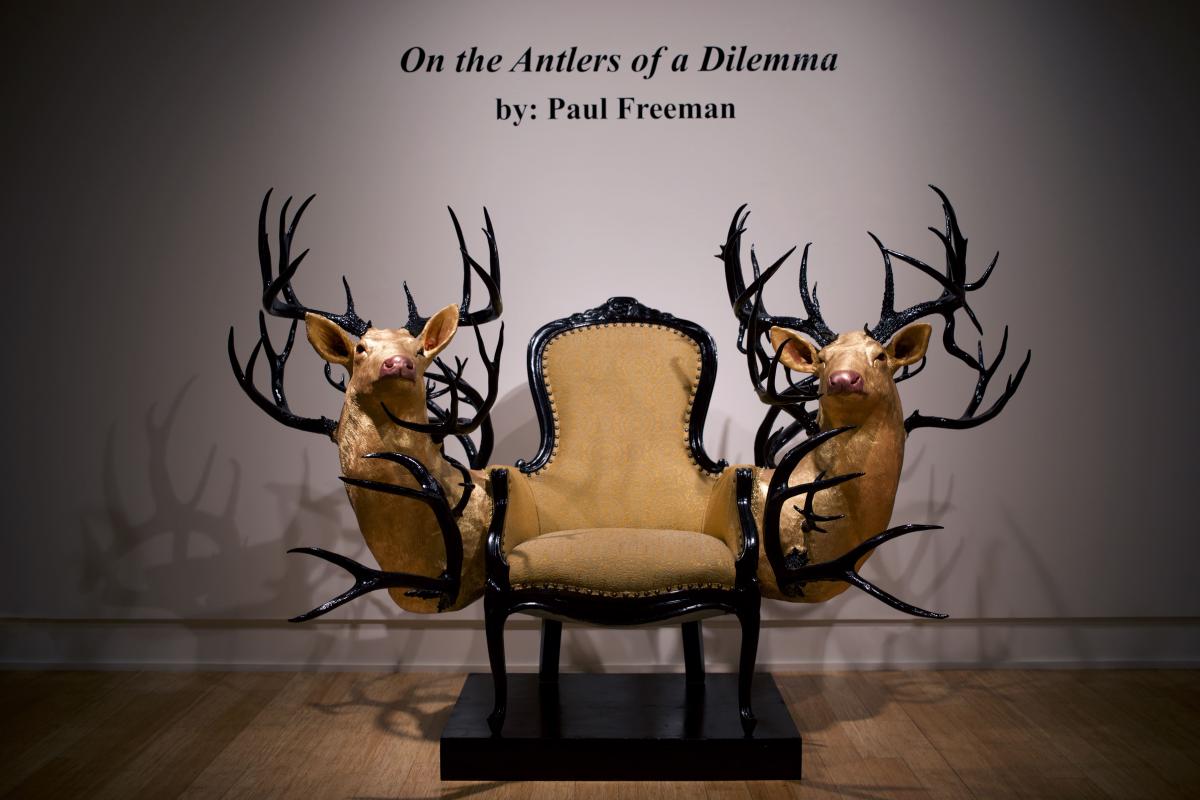 Freeman says that while creating he often asks himself “why couldn’t you stop there, why does it have to keep happening?”

Just because a work is open to the public, it doesn’t necessarily mean that the piece of art is complete. Paul believes that artists are inherently industrious and that the idea of an exhibition being truly “complete” sometimes isn’t feasible.

Imagine creating an art piece and exhibiting it, yet, internally it doesn’t feel complete. It’s a contradiction, to say the least.

His latest exhibition, On the Antlers of a Dilemma, is currently flying above the foyer in La Cite Francophone. I met Paul there, catching him during a brief break from his latest project, to talk about the theme of the show. “Each of these creatures has a basic complimentary strategy which I have I carved, cast, and moulded with raw nerve endings. The pale colours that I use are opposite on the colour wheel causing a little fiction but without creating an iridescent colour,“ Freeman says as he brushes his grey hair back with his dry paint-covered hands.

Paul describes the exhibition as “something that took four years to complete” yet he says it “still needs a lot of work,”

The antlers on this piece represent reintegration into social life and the anticipation of what’s going to happen next. It took 14 hours, and six people to place the antlers in the correct way. 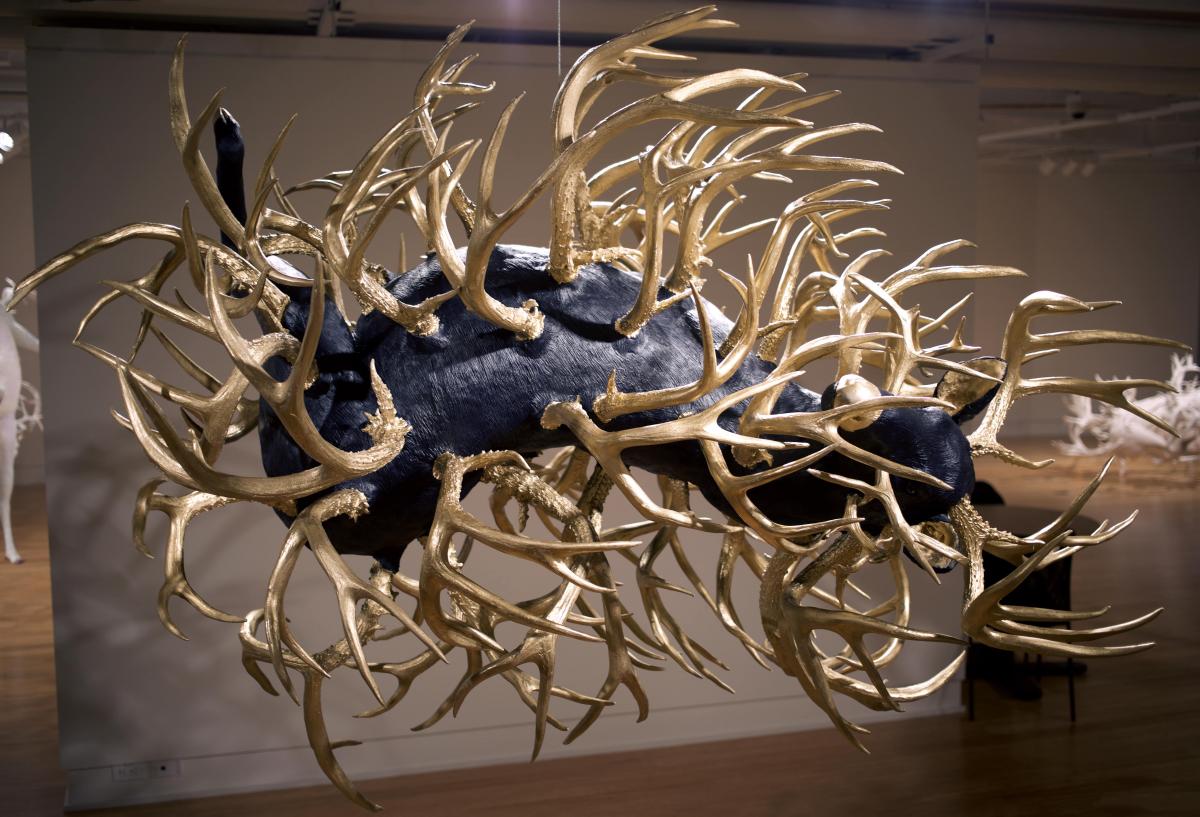 Before he met me for this interview, Paul was working intensely on a brand new piece for the Art Gallery of Alberta’s own Art On The Block annual fundraiser, which explains the paint on his hands. He describes the piece that he is currently working on as ”a macro creature which explores the friction between horror and beauty.” Knowing Paul Freeman’s signature style, it’s sure to turn some heads.

With a penchant for depicting animals, while focusing on the biological boundaries between genders and species, Freeman’s artworks have been showcased in exhibitions across Canada. He was also awarded the Eldon and Anne Foote Edmonton Visual Arts Prize in 2012. 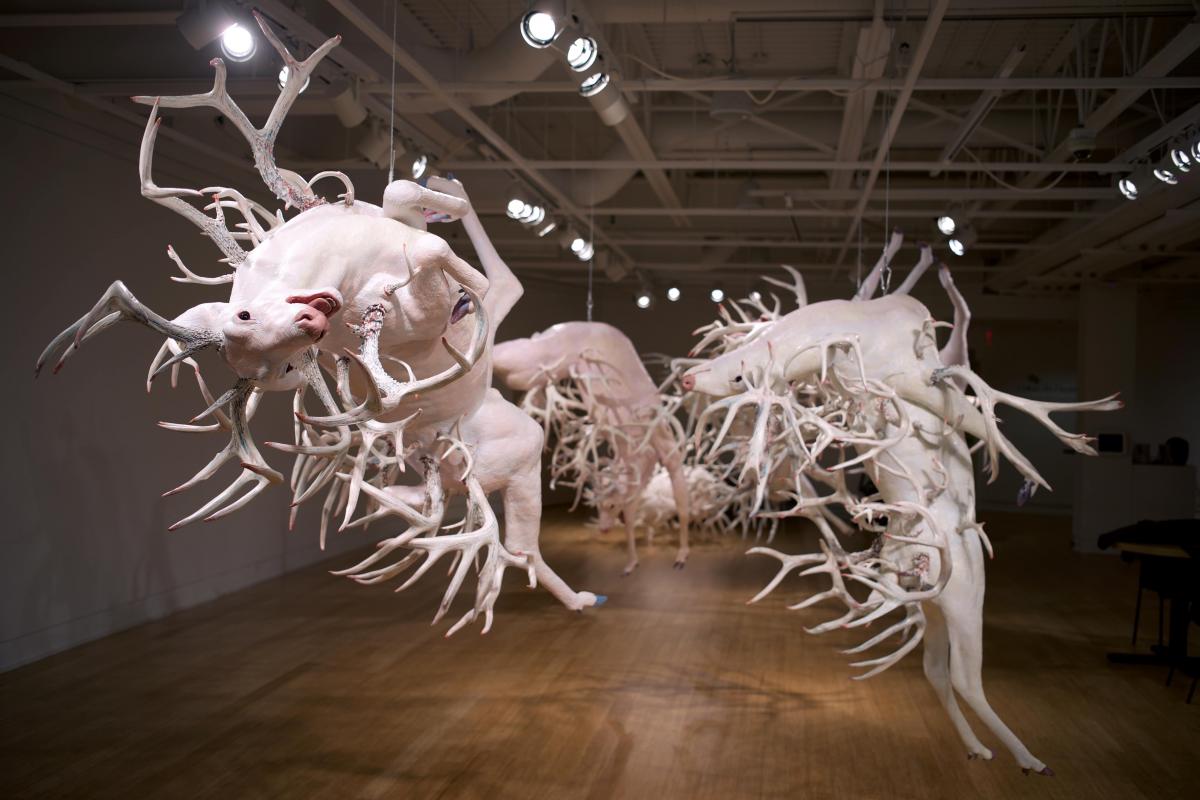 Paul’s day job gives him the opportunity to give back to the community. Paul is the Artistic Director at the Nina Haggerty Centre for the Arts, which provides opportunities for professional artists with developmental disabilities. On a day-to-day basis, his role as a visionary for the centre may include: looking for exhibition opportunities, applying for grants and creating special projects.

Nina Haggerty offers a large selection of opportunities, tools and encouragement to budding professional artists to create their art pieces.  “We’re not helping people make art we are helping people become better artists,” Freeman says as he leans back in his seat.

For Paul, the most rewarding part about working at the Nina is supporting the progression and transformation of the artists over time and ‘’giving individuals, who more often than not are self-described as having a disability, the experience of being believed in daily.”

His next piece will be featured at your AGA’s Art on the Block on May 24, 2019. Watch for tickets to be available in late March for your chance to bid on this not-yet-complete work.

Can’t wait until May? Paul Freeman also has six pieces of artwork available for rent and purchase at Art Rentals & Sales on the lower level of the AGA! Take a look!