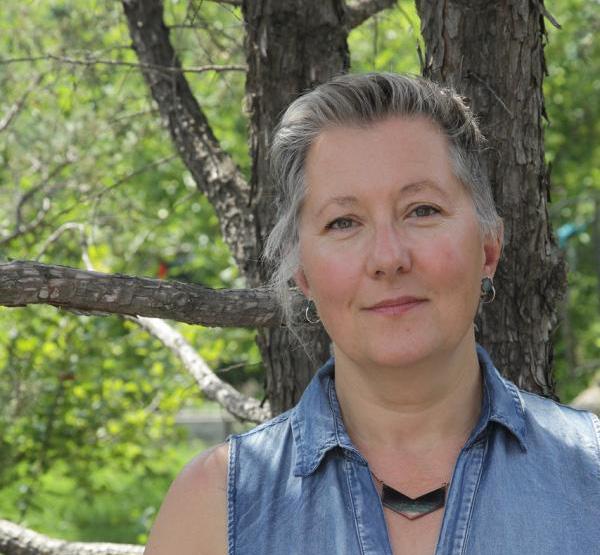 Edmonton-based Sydney Lancaster has spent the past 15 years working as a full-time multi-disciplinary artist. She is also one of the many talented Alberta-based artists featured in our Art Rentals and Sales program. This initiative provides an opportunity to purchase great local art, or if you prefer to continually change the art in your home, work can be rented.

Sydney grew up in Southwest Edmonton in a household filled with art and creativity. Her father was a journalist who crafted words and stories and both her parents worked in ceramics; her mother also studied painting at the Ontario College of Art. She herself first explored the world of creativity with a degree in literature and critical theory, but found her way back to visual art because, as she states;  “Creating art allows me to express things that I can’t find the words for in literary form.”

Lancaster describes her work as being conceptually based; she manipulates realistic imagery so it no longer represents the thing itself, but instead deals with ideas in a metaphorical or symbolic way, to examine the themes of time, memory, place, and ideas of belonging. Her project-based multidisciplinary practice draws inspiration from her journalist father and her post-secondary education. She was particularly drawn to literature and theory which explored gaps in individual narratives, subjectivity, and a first-person point of view. This is best represented in her work  Macromareal, a collaborative project created with composer and sound artist Scott Smallwood during two residencies in Nova Scotia. Macromareal is a multi-media body of work that reflects on the Bay of Fundy’s tide, which is the highest in the world, and the history of shipbuilding in the area.

What has most stuck with her from her studies in English is the notion that individuals shape (and continually alter) their own reality and sense of self.  As a result, explorations of the idea of “home” is a recurring theme in Lancaster’s work. This can be seen in her works York and NEST – 21st Century Nesting Practices.

In York, Lancaster and fellow artist Marian Switzer explore the rooms inside Edmonton’s now-demolished York Hotel and the fragmented stories of its visitors. Once a central point of Edmonton’s urban core, the York Hotel was shut down and scheduled for destruction as a part of the City of Edmonton’s efforts to revitalize the area. York asks viewers to see things from a different point of view, and question the displacement of low-income residents due to gentrification.

In NEST -21st Century Nesting Practices, she explores the connections between the actual process birds use to make and remake their nests and concept of home and human resilience.  Several works from this series can be found in Art Rentals and Sales.

In both of these bodies of work, Lancaster hoped to create a space for viewers to consider the details in each work, explore the differences and expand our ways of seeing different journeys.

Lancaster has a long-time connection to the Art Gallery of Alberta (AGA). She remembers the AGA building back when it was the Edmonton Art Gallery (EAG) -- and being excited to see the gallery re-invented into a space in Edmonton that can now showcase exhibitions that you used to have to travel nationally or internationally to experience. She also remembers forming early connections with other artists through the gallery and realizing there was a vibrant, local, contemporary art scene here.

See some of Sydney’s artistic works available at Art Rental and Sales at your AGA and be sure to explore all the other great artists whose work you can bring home.