Slavo Cech has been sculpting ever since high school when he first had a part-time job manufacturing commercial Christmas decorations. He has long been attracted to metalworking as a medium because of its versatility. “I like the fact that you can walk around the piece. The shadow work, the lines, and how it changes as you view it from different angles and perspectives.”

You’ll often find Cech in his studio on the south-side of Edmonton, making sculptures or work on large-scale commission projects, including gates and railings. While he enjoys both types of work, Cech admits “it’s harder to make a really good sculpture than it is to make a really good gate! This variety of metalworking tasks allows him to use different parts of the brain

He’s also been donating to Art on the Block for the past eight years. This year he decided to try something a bit different. Cech narrowed his Art on the Block donation down to two possibilities. He then posted photos of both sculptures on Twitter and asked his followers to vote on which one he should donate! When asked whether he knew which one people would vote for, he answered: “I had a sneaking suspicion, but it’s a fun way to get people involved”. 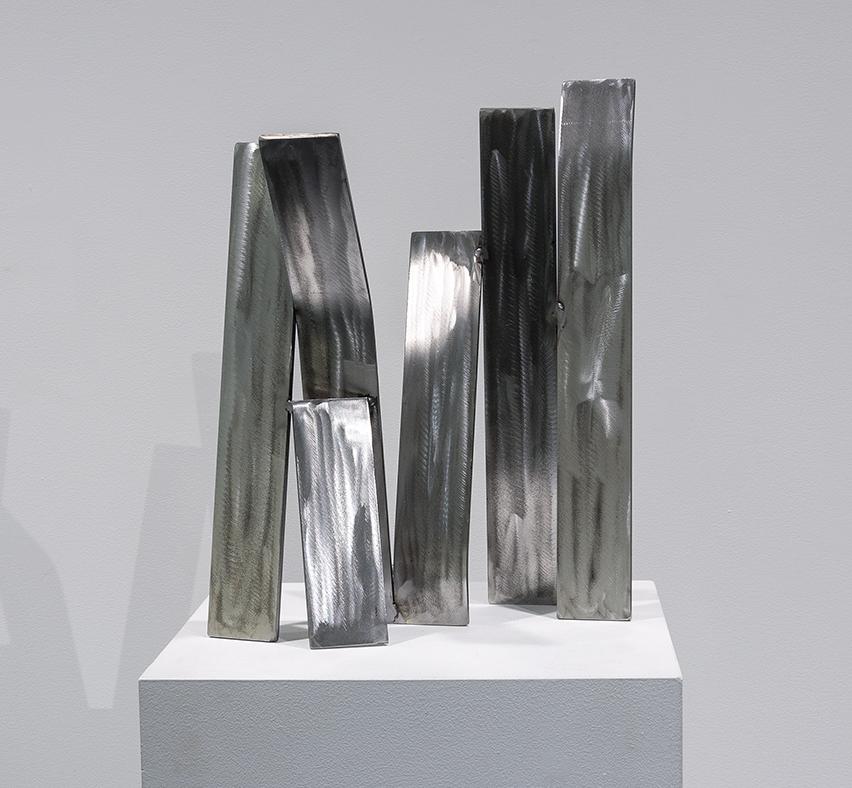 The winning sculpture, “Vertical Form” shines of polished steel. It was also the inspiration for one of the series’ that Cech is working on now, “Prairie Grasses”. Cech often works in a series; he gets an inspiration and follows it with each work evolving from the one before. In this case, “the work just started off as vertical structures, playing with the forms in a vertical sense. Then I started to incorporate the curves and it sprung to mind the prairie grasses.” So far there are 8 in the “Prairie Grass” series, and he sees it continuing to grow, and perhaps even become a large-scale sculpture at some point. A number of the works in the series have already been sold and sent off to new homes.

Cech wanted to donate something different to Art on the Block this year. “I wanted something that I had a feeling that someone would fall in love with and want to buy”, he recalls. “Vertical Form” seems to fit that bill. Cech describes the work as “a very approachable piece that I think people could probably see it in their space”.

And Cech knows what people like to bid on at Art on the Block. He attends every year. “I think it’s the best party of the year personally. It’s the one I enjoy most! He appreciates the opportunity to connect with other artists and with people who are passionate about local arts.

We live in a great city that does a good job of promoting the arts and I think that, as an event, Art on the Block, I think it’s a gem!

See Cech at the event tomorrow and be ready to bid on “Vertical Form” and bring it home! Tickets are still available at the Art on the Block website.