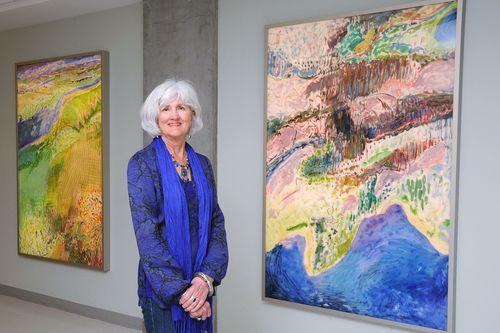 Born and raised in Edmonton, Lynn Malin was educated at the University of Alberta and then the University of Toronto.  After extensive travels overseas, which involved further education in France and some early experiments with painting, Lynn commenced her professional career by teaching art at Harry Ainley High School in Edmonton.  In the early 1980s, She turned to painting full time; first, with watercolours and later, with acrylics and oils both on canvas, paper and lexan. Lynn also produced many monotypes. Eighteen years ago, she began to collaboratively work in sculpture, producing pieces and installations that are now in the public domain in downtown Edmonton, and at the University of Alberta. Lynn have maintained a studio in Edmonton since 1985.

Lynn has attended workshops at Emma Lake (University of Saskatchewan), Grande Prairie North, the Emily Carr College in Vancouver a self directed residency at the Banff centre for the Arts. As well, she has held residencies at the Columbia Icefields, the Gushel Studio in Blairmore (the University of Lethbridge), the Leighton Colony Residencies (Banff Centre), in Mojacar, Spain and just recently at Meyers of Munich working with glass.