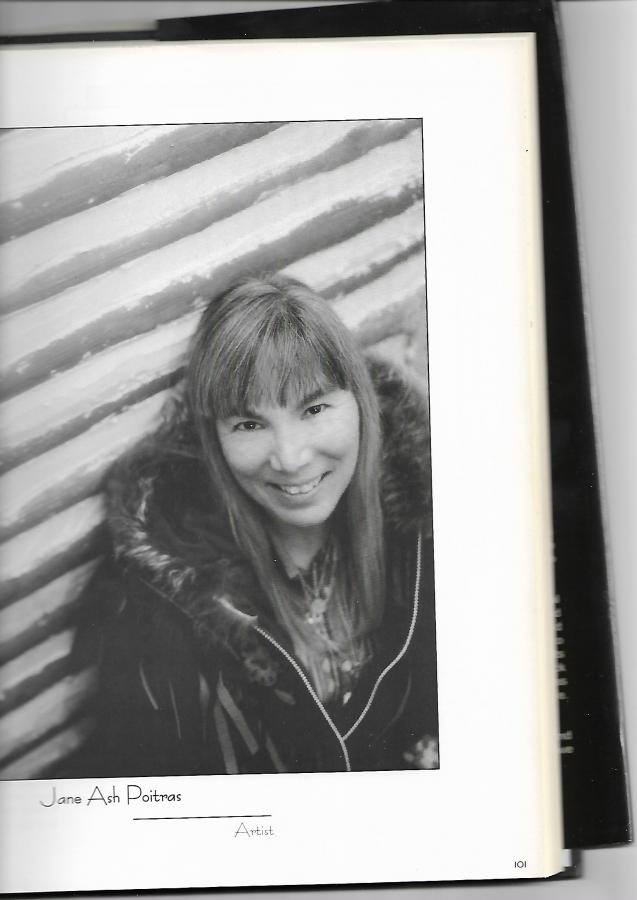 Courtesy of the artist

Dr. Jane Ash Poitras CM RCA has received many honors as an internationally acclaimed visual artist and lecturer who has influenced a new generation of artists and students .

She has now added the Order of Canada to the numerous awards she has received in recognition of her achievements and contributions that include the Queen Elizabeth II Diamond Jubilee Medal and honorary doctorates from the University of Calgary and the University of Alberta.

With Bachelor of Science in Microbiology and Bachelor of Fine Arts degrees from the University of Alberta, she went on to obtain a Master of Fine Arts degree from Columbia University in New York City. Immediately upon leaving Columbia, she returned to Canada to play a significant role in the development of a new visual vocabulary for First Nations perspectives in contemporary art. Her unique style combines representational strategies of postmodern art—collage, layering, overpainting and incorporation of found objects—with a deep commitment to the politics and issues common to indigenous peoples.

A sessional lecturer for the University of Alberta’s Faculty of Native Studies for more than 20 years, throughout her career she has been much in demand as a guest lecturer at universities and conferences and at the many exhibitions of her own art across Canada and the United States and internationally, including Paris, Amsterdam and Mexico City.

Jane’s journey of discovery and creation has opened new doors to enlightenment as she combines her many diverse interests in pursuit of her distinctive artistic vision. Over the years, Jane has pursued many different routes of discovery, each reflected in the art she has produced. Those journeys of exploration have taken her not only into plumbing her Aboriginal roots (beginning by reconnecting with her birth family and her Mikisew Cree First Nation), but into such diverse topics as pharmacology, ethnobotany, linguistics, and literary creations supplementing the creation of visual works of art.

The range and diversity of the interests that inspire and inform her artistic creations have resulted in a number of distinctive series of artworks that, over time, reflect the paths she has taken on her journey of discovery. A survey of those series over the 30 years of her professional career could well serve as a map of that journey and a graphic record of her evolution as an artist.

For example, in 2009 she traveled to Japan with her son Eli, a student in Japanese language and culture, a tour that consisted primarily of visits to Buddhist monasteries and left a lasting impression on both of them. When she returned, while she continued to focus on Indigenous history, culture and spirituality that had informed and inspired her previous work, her new work subsequently began to incorporate Japanese elements and their placement according to Japanese art customs.

Edmonton Journal visual arts critic Janice Ryan previewed one of Poitras’s recent exhibitions, an ambitious collection of works layered with handwritten text, vintage photos, stamps and newspaper clippings placed over a background of thinned oil and acrylic paint . “The work is engaging for its beauty alone,” Ryan wrote. “But up close is where the cerebral journey begins, unraveling fragments of information, both subtle and in-your-face pronouncements, to reveal the story this imaginative
artist is telling.”

One of the key aspects of her art that sets it apart from the work of other artists is her ability to combine and reconcile disparate themes and elements to create fully resolved works that convey information on different levels. Commenting on her art, Poitras says “each blank canvas is an invitation to a journey of discovery. I may begin with an idea of what the final destination—the completed painting—may be, but I’m always open to the unexpected. As Carl Beam said, the art of placement is a spiritual act. Each step in the creative process may reveal unexpected choices that require decisions.

“The final decision for each piece is to know when it is resolved, when it is finished.”
The art of Jane Ash Poitras is featured in dozens of prestigious private, public and corporate collection.

She is represented by the Bearclaw Gallery in Edmonton, the Canada House Gallery in Banff, the Kinsman Robinson Galleries in Toronto and Galerie d’Art Vincent in Ottawa.